Previous Next
Revisiting ‘The Real Poz Guys of Atlanta’

During the first year of producing my blog videos back in early 2009, it occurred to me how much of my health and happiness was the result of having a solid support network. I wanted to find a way of showing this through my blog, and the result would be two video episodes that remain a true highlight of My Fabulous Disease. 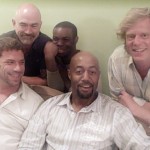 What might it be like, I wondered, if I invited some friends living with HIV over to my place and the video chronicled our evening together? Was there value in showing our support and friendship? My cinema verite experiment could be inspiringâ€¦ or a complete bore.

When “You Gotta Have Friends” was posted on TheBody.com on April 22, 2009, it became my most popular episode to date and received a flurry of comments from across the globe. So many people loved seeing a group of men with HIV supporting one another and having that level of honesty. For many viewers, simply seeing friends with HIV living happily was an inspiration.

They loved doe-eyed Antron, the 23 year old with the heartbreaking story of his mother’s reaction to learning his status. They left comments about the tattooed, sexy James, and his candid stories of sex and disclosure. Viewers loved the philosophical Craig, and his moving description of his mother’s face the moment he revealed his status, and equally, how Eric created his “HIV Team” of physicians and family to combat his disease.

There’s no doubt that I will do another episode with my friends again sometime (UPDATE: Episode III is here), but I wanted to update you on their lives as they are today.

Eric, who famously declined to discuss his status with most people because “I’m Southern. We don’t talk about such things,” reports that his life is getting even healthier. “I quit smoking after 32 years on tobacco, I joined a gym, I got a trainer, and I have a new consciousness on eating,” he says. “At this rate, I’m going to live forever.”

Eric is also glad that his Mom remains one of his biggest supporters. But that wasn’t meant to be for Craig, who has lost the mother he so lovingly described in our first episode. “I am still recovering from that ongoing blow and the indescribable loss” Craig told me. “She was one of my best friends and it is still hard to really accept life without her in it.” Craig continues his work as a leading voice for gay men of color and HIV prevention.

The grief is something Eric can relate to, considering the loss of his partner Maxwell, about whom he shared in the second episode. “I don’t want to forget him,” Eric says now. “It’s not really sadness, but more a sense of him that stays with me.”

Antron has stopped writing in the black journals he brought to show and tell, and uses his laptop these days. That will come in handy for the young writer, who has a new project consisting of poems, short stories and rumination entitled Ayo: Lost and Found.

The advice that Craig had for Antron to carefully consider “who he lets into his life, and into his bedroom” hasn’t been lost on Antron, who tells me, “I have a deeper responsibility to value myself more and form a beautiful relationship with me first before pursuing any one.” He is planning to move to New York in January, and maintains a blog for his writing.

The dating life that James was negotiating in both video episodes has slowed, and for some challenging reasons. “I seem to have developed a fear of discussing my HIV and HepB status with potential dates,” he says. “I’m back on interferon for another 48 week treatment.”

The grueling treatment hasn’t affected his work as a massage therapist so far, but James is vigilant about the potential effect on his recovery from drug addiction. “Friends are so important right now, making sure I don’t isolate and relapse like I did during the last interferon treatment. I am blessed to have some really great friends.”

And that sentiment is really what this project was about for me. The healing grace of our friends, and how that support comes in handy during trying times.

UPDATE: See episode III of “The Real POZ Guys of Atlanta” when the men discuss addiction, hepatitis, tops & bottoms, and the mysteries of the female condom (and who loves them).