The Inspiring Advocates of the 2013 U.S. Conference on AIDS

Previous Next
The Inspiring Advocates of the 2013 U.S. Conference on AIDS

At the recent 2013 United States Conference on AIDS (USCA) in New Orleans, the word “stigma” wafted through the event, in workshops and throughout the exhibit hall, like an annoying new pop song you couldn’t stop humming. 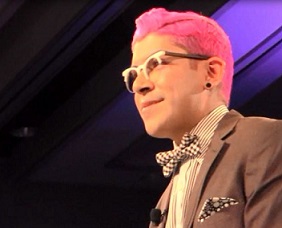 The Stigma Project. The Mr. Friendly campaign. The CDC “Let’s Stop HIV Together” media campaign. My own POZ Magazine stigma cover story issue (“The Sound of Stigma”), an indictment of gay community and the antipathy between positive and negative, sat in stacks at the POZ booth. Panel discussions and workshops were held on identifying stigma, combating it, living with it. If Lady GaGa would only record an anthem about it, she could finally knock Katy Perry off the charts.

But there’s good reason for it. As Peter Staley (How to Survive a Plague) said in a session of people living with HIV, “One of the biggest generational shifts that I find most depressing is that most of the stigma we deal with now comes from within communities.”

In my video blog recap, you’ll meet as lot of people addressing this issue in various ways. You’re also going to meet advocates of both the celebrity variety (Mondo Guerra of Project Runway (photo at top), and photographer Duane Cramer) and those doing the work on the ground in communities large and small. As usual, it was the people and their personal commitment that caught my attention, and this recap is a salute to their efforts.

The generational differences Peter Staley spoke of is also a curious new bend in the culture of HIV. Once upon a time, our communal experience of AIDS, at least as gay men, was much the same. Our lives were bound in the sameness of death, despair, and then, hope. But since then our generations have separated, with younger gay men less traumatized or fearful about the virus, and (too Xanax many) older gay men judging them for behaviors and mistakes we ourselves made in our youth. This too is a subject ripe for conversation, with writers like the irritatingly young Tyler Curry broaching the topic, and public forums springing up to address the matter of post-traumatic stress among “the AIDS generation,” which I suppose means me.

To some, conferences like USCA represent “AIDS, Inc.,” or a waste of resources that feels self-congratulatory and a poor excuse for plane flights and rubber chicken plenary lunches. I disagree. If the pharmaceutical industry, highly visible and paying much of the tab at events like these, wants to underwrite sessions while promoting their key messages and products, they can be my guest. Conference attendess are sharp enough to take what they need and leave the rest, and the pure energy and support between those doing the work is worth the cost in my mind.

As Paul Kawata, of the National Minority AIDS Council, the producers of the event, said to me, “If we can inspire people to devote one more to year fighting this epidemic, I feel like we’ve won.” 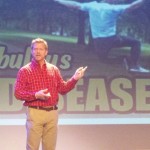 I have the privilege of presenting “Mark’s Poz Time Machine” at a retreat for poz men in Montana this weekend, hosted by the Montana Gay Men’s Task Force. I really enjoy this presentation, which is an interactive walk through the history of of HIV/AIDS, from 1981 to the present, using video clips and photos, my own story, and drawing upon the life experiences of participants along the way. From my pre-AIDS win on The Price is Right to the tears of the mid 1980’s and then a re-established HIV culture, it allows everyone to contribute some powerful storytelling and a shared history. If you would like more information, contact me. I come cheap.