The Price is Right, 30 years after coming on down

Previous Next
The Price is Right, 30 years after coming on down

When I was nineteen years old, I vacationed to Los Angeles and won a car on “The Price is Right.”

In the following years, if I really liked you and wanted to impress you — or give you a small, wacky glimpse of my life — then at some juncture I’d say “So hey, have you ever been to Los Angeles?” Or, “Did I ever tell you about the car?”

It was a long time ago. Thirty years. I have a videotape of the entire episode and it gets trotted out and viewed from time to time. Well, maybe not as much anymore.

Year after year I’ve seen that video and find myself pulling farther away from the image on my television screen — the oldest tape I have of myself on TV, although, make no mistake about it, I have many.

On the tape I’m impossibly cute, with a tall lean body and a freckled face straight out of Howdy Doody’s Peanut Gallery. There is bright orange hair on my head, blown dry to late-70’s perfection and parted in the middle between two feathered, astoundingly symmetrical sides.

It’s Spring 1980. My lover Charley and I are visiting my old college friend Charles, who lives in Los Angeles. Charles takes us to CBS studios for a tour, but once there we find out they don’t give them anymore. But we can go wait in line for “The Price is Right” if we want to, the lady says. Why not? A live game show taping. Cool.

We stand in line and this producer comes by with an assistant in tow, and he’s chatting with everybody in the line. One by one. And the assistant is taking careful notes. Get it? They’re picking contestants. So the producer gets to me and whereas everybody’s been kind of shy and polite and maybe a little perky, I grab his hand and shake as hard as I can and just about bust a gut beaming, saying “Hi there, I’m Mark King and I drove all the way from New Orleans Louisiana just to be on this show!”

I watch TV. Everybody knows what they’re looking for.

Portions of The Price is Right Story are deeply ingrained, as frozen in my delivery as they are on that old Betamax video tape. Hearing Johnny Olsen shouting “Mark King! Come on down!” and galloping down the ramp to bidding stations in front of the stage, jumping up and down, my sprayed hair jolted above me in two feathered clumps, lazily floating back down to my head like snapping an orange sheet over a bed and watching it descend.

Or when I won the very first prize that came up for bids — an Amana Range. “And to the winner of that range goes,” I can hear Johnny Olsen saying, “Kentucky Fried Chicken in an insulated tote bag. It’s so nice to feel so good about a meal!”

“And the original retail price of that range is… six hundred and eighty nine dollars and Mark, you’ve won it! Come on up here!” Bob Barker declares, and I scramble up for a chat with Bob that holds no memory or recollection, just what I’ve seen on the tape, because I truly had no idea what the man was saying, such was my shock. But I nod and grin in the right places.

Bob asks me where I’m from and I tell him I’m a student at the University of New Orleans. Really? What year? he asks. I say I’m a senior — a lie, I was a sophomore, but couldn’t have told you my middle name at that point — and say that I’ll go “right on to graduate school to get a masters in Arts Management.”

Today when I see the tape, I want to wipe the idyllic grin off that skinny boy’s face and correct the error I made years ago. I had it all wrong. “Well Bob,” I would say instead, “I’ll finish college through the mail after I move here to Los Angeles and work for a heroin-addicted mail order sleaze bag. Then I hope to make it big as a sexual entrepreneur.” “That’s marvelous!” Bob would then reply, “A prostitute perhaps?”

The cameras would turn to the audience, all of them glued to the monitors and nodding expectantly. “Aw, you flatter me, Bob. Seriously, I was thinking I’d be good at getting people off over the phone.” Bob’s most winning game show host smile would appear. “What a talented young man!” he would say with fatherly pride. The APPLAUSE light would flash again and again. The audience would react like stadium fans witnessing a touchdown. “There’s even more, Bob. I’ll go on to watch some friends die horribly of a disease we haven’t even heard of yet, fight my drug addiction, and then spend years searching for life’s greater meaning. You have anything up for bids that might help me with that?”

But back to reality — or, at least, “The Price is Right.”

Bob stops talking for a second and Johnny Olsen announces what I just might win — a shiny new Pontiac Coupe! The audience absolutely screeches, and the camera flashes to my lover Charley whistling with his fingers in his mouth, wearing exactly the same jeans and red t-shirt as myself. We were in that early, wearing-matching-outfits stage of our relationship.

On stage, Bob inspected the car with me before the game began. “Just look at these wire wheel covers here, Mark. Say tell me,” he questioned as he put the microphone to my lips, “do you have a girlfriend back home?” No, Bob. But your camera man must adore my homosexual lover because he’s given him every reaction shot since I stepped up here.

“Aw, several!” I offered with a laugh and an adorable but practiced shrug. “Well, you’ll have several more if you win this one!” Bob said. The game was something called “Lucky Seven” and Charley screamed out every last thing for me to say and do, which was a great help since I didn’t understand what the hell was going on. After going step by step through the game, with tension building and Bob reminding me how close I was to winning every three seconds, I get to the last question. After Charley’s prompting I give the winning answer, the audience goes nuts, and the camera man goes to Charley for even more shots as he explodes from his chair and waves his hands and dances about. “You’ve won that car!” Bob shouts. If I had won a fur coat Charley would’ve jumped to the stage and thrown it on, so help me.

I furiously shake Bob Barker’s hand and notice how much make-up he has on. Thick, like a paste. And his hair dye has left a brown stain across his hairline. He introduces the first sponsor while the camera returns to me, beaming, all shocked and happy. I pick my teeth with my tongue and they break to a commercial. The show went on to other contestants of course, but I’ve never watched the tape that far. The beginning of the show has been played ragged, however. About six minutes of my life, run countless times on the TV in my living room, after some dinner with friends and maybe coffee and dessert. 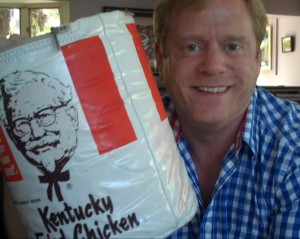 I sold the car to my sister Nancy for what the income taxes cost me — I was in college and didn’t need one anyway. The Amana Range went to my brother David as a wedding present. I kept the insulated Kentucky Fried Chicken tote bag — my lone trophy from the event — and store it in the laundry room. It’s nearby if there’s a showing of the video and it makes a great prop during the viewing.

Within a few years of Coming On Down, there would be enormous differences between that video boy and myself, shaped by life events that would throw a wet blanket on my aw shucks optimism. I’ve tried to recover from them, to regain the hopeful, expectant glimmer found in the eyes of the kid from “The Price is Right,” with mixed success.

He was fearless, I have reservations. He believed, I suspect. A few years in the life of a gay man living at the dusk of the sexual revolution and during the dawn of a terrible disease does manage to bring about some striking changes.

I have a few stories about those times, too. Some of them aren’t very attractive, and I definitely haven’t shared them at parties. I wonder if they have any value, if they define something more than myself, if they sound familiar. I’ve spent a lot of time trying to decide if what I’ve been through has helped me, if it “made me a better person,” if it was, in fact, a gift.

And wondering, of course, if the price was right.

Just like the old video tape trotted out for the occasional viewing, I like sharing this (slightly revised) prologue from my book A Place Like This. It may have been thirty years ago, but winning the car remains one of my life’s milestones. Can I still approximate that young man’s happiness today, or reconcile him with the man I have become…? — Mark