Who needs a ‘Positive Lounge’ at AIDS2022, anyway?

Previous Next
Who needs a ‘Positive Lounge’ at AIDS2022, anyway? 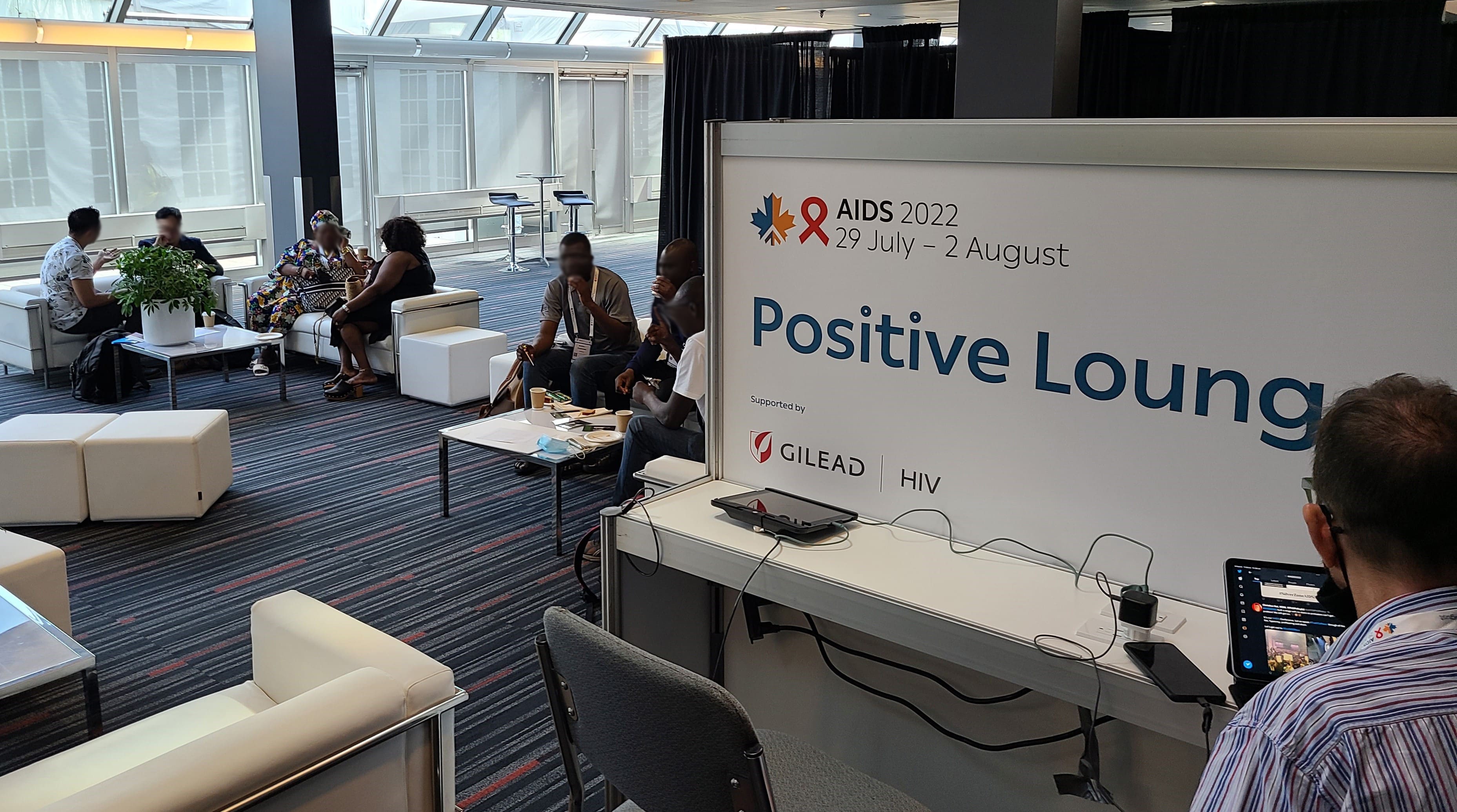 The Positive Lounge, for people living with HIV, at AIDS2022 in Montreal

The server is dressed in a black bolero jacket, the kind of thing waiters in a fine restaurant might wear, and he is carrying a tray of juices to restock the food table. Clearly, he is conscientious about his work, because the table is a pristine assortment of baked goods, coffee service and other refreshments. The server returns to a catering area behind a black curtain for more supplies.

There is a white leather seating area in the center of the main lounge, beyond which are quiet spaces, mats for occasional yoga sessions, and a curtained area with massage tables at the ready. Because the lounge is located on the highest level of the  Palais des congrès de Montréal, there is a rooftop deck just outside featuring stunning views of the city. The entire operation is staffed by cheerful volunteers who speak in low, comforting voices.

This is the “Positive Lounge” at AIDS 2022, made available for people attending the conference who are living with HIV. Walking into the lounge is an implicit disclosure of your HIV status.

The lounge is busy on this, the second morning of AIDS2022 in Montreal. People are settling into a routine after the exciting opening day, and are more apt to take some down time to review the conference program or catch up with friends.

The lounge was created by a team that included Jordan Arseneault, a Montreal man living with HIV who is the co-founder of the Sero Syndicate, a collective focused on HIV justice and health. This “corporate lux” feel of the main lounge area isn’t what Jordan had in mind, but the project has been a learning process for him. 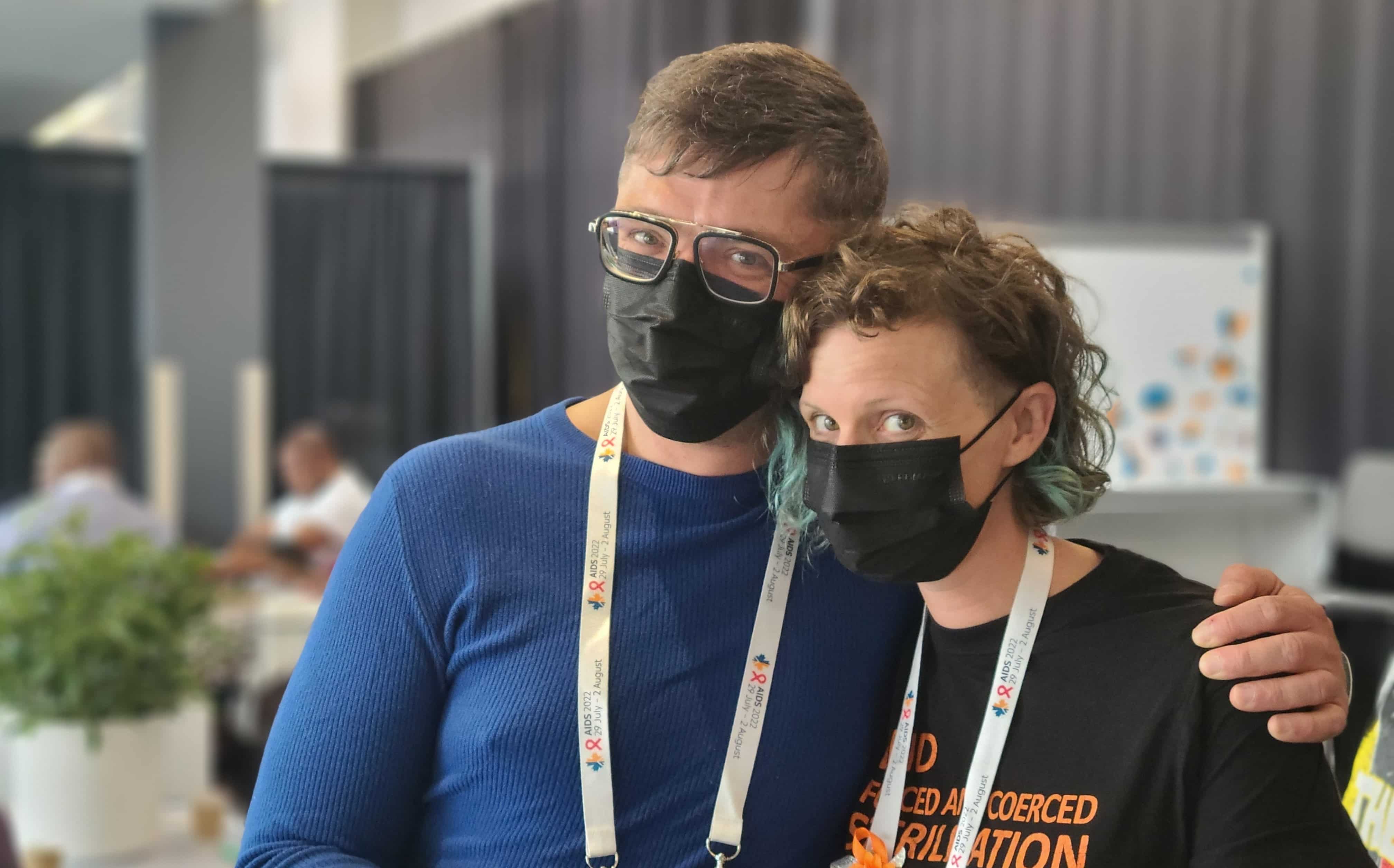 “This is supposed to be a reprieve from the information overload of the conference,” Jordan explains, even if it isn’t what he initially envisioned. His activist educator hat was hard to remove. He had originally wanted a more dynamic space that educated people with HIV about issues and injustices they care about. He was convinced to do otherwise.

“Imagine you are from the global south,” Jordan said about his change of heart, “and you come here to the lounge and I, as a white Canadian, have thoughtfully curated a poster exhibition about sub-Saharan Africa… like, it could go wrong really easily.”

Everything, from the elegant catering service to the modernist leather furniture (“it’s giving me a ‘Brian Eno Music for Airports’ vibe,” Jordan quips) comes courtesy of the conference host, the International AIDS Society (IAS), and Gilead Sciences, who foot the bill.

Both IAS and Gilead have had their troubles when it comes to connecting in a meaningful way with grassroots communities and organizations, including people living with HIV. The AIDS2020 conference, before being sacked by COVID, faced a near mutiny by community-based partners who didn’t believe IAS cared much about their involvement, a controversy still brewing today. Gilead’s problems in this regard are ever present. Offering a cushy recliner and an orange juice hardly remedies them. 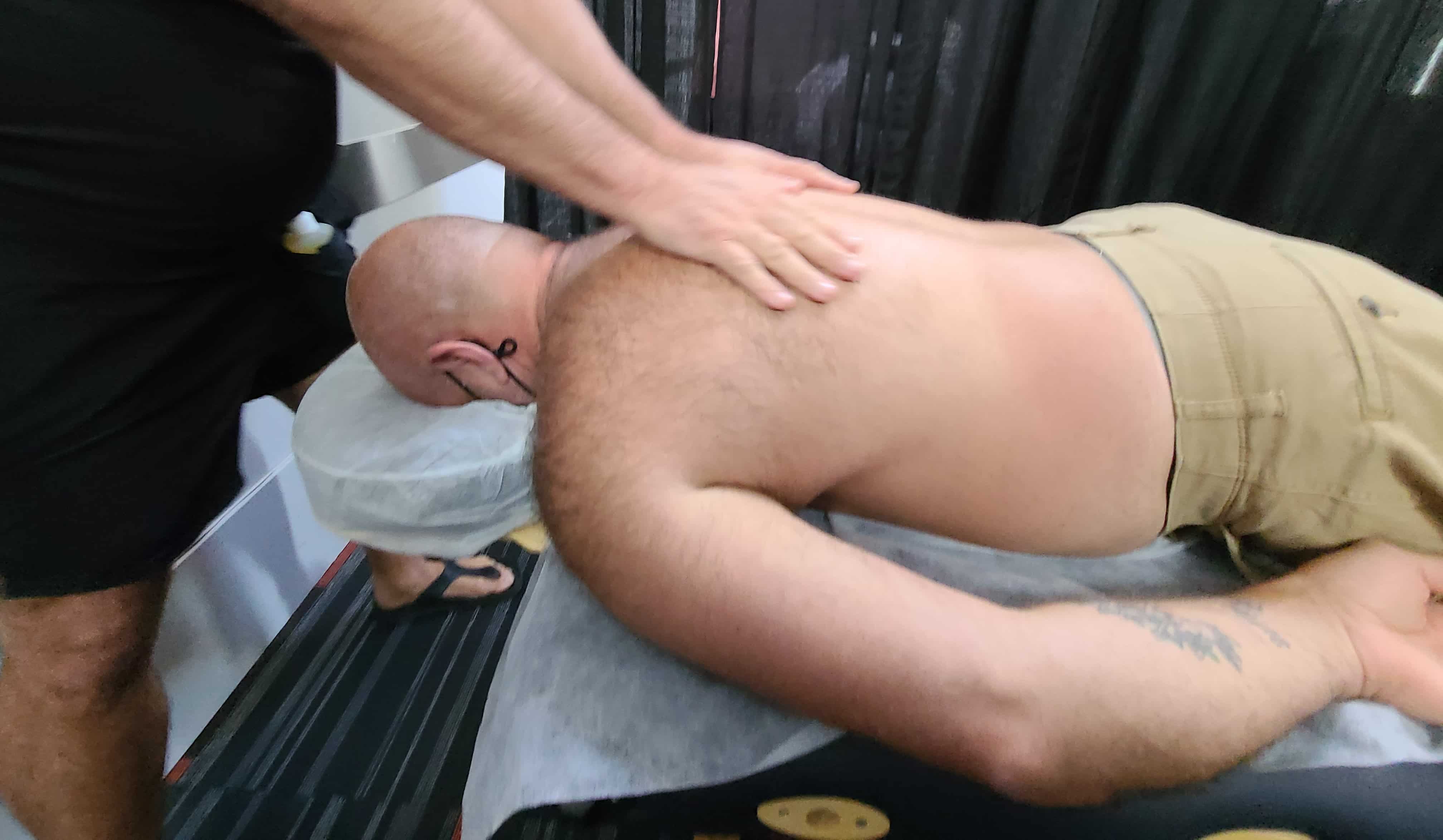 Massage is offered in The Positive Lounge at AIDS2022

In the earliest years of the AIDS crisis, organizations in large epicenter cities did everything they could to make life, and looming death, as comfortable as possible. The list included massages and complimentary dinners and chiropractic sessions and a whole lot of metaphysical healing (I’ve had more crystals laid on me than Shirley MacLaine), because why the hell not?  I could have subsisted during those years, and maybe I did, on nothing but free pharma dinners and rides to support groups.

But that was then. Strolling through the AIDS2022 Positive Lounge, I was having a tough time putting a finger on why the effort left me with mixed feelings. Was I in any way deficient or, more to the point, worthy of such treatment?

Enter Jessica Whitbread, who Jordan waves over to our conversation. Jessica, among many other significant accomplishments as a woman living with HIV, worked on the Positive Lounge for the last conference. She’s also one of the forces behind the uproarious, sex-positive party, “No Pants No Problem,” that has become the talk of each of the bi-annual international AIDS conferences.

“Unlike some of the doctors or researchers here that are not living with HIV,” Jessica chimes in, “they get to turn it off at some point. And sometimes talking about HIV or reliving your trauma…”

Jessica is reaching for the right words and I’ve already understood exactly what she is saying. For every prevention poster hanging in the halls, for every presentation or speaker or slides showing pills and symptoms, there are people walking these hallways who feel it on an entirely different level. We have, literally and figuratively, internalized our HIV diagnosis. It can quite easily bring up some shit.

“I come here with a group of young people living with HIV,” Jessica says, “ and they’re overwhelmed. I bring them here to the lounge and they relax or they cry. And I tell them, ‘these are your people, in this space. If you need to shut off the conference, you can do it here.’”

Jessica emphasizes that AIDS2022 isn’t immune to stigma. People living with HIV can still be treated here like second class, or patients in need of fixing, or simply viewed differently.

“Do I need a massage every day?” Jessica asks herself. “Maybe other people do, too. But I appreciate it very much.”

The conversation challenged my deeply ingrained privilege – a constant state, in these times, and a necessary one if we are to see outside ourselves. The fact I can stroll the hallways of AIDS2022 whistling a happy tune doesn’t mean that other people living with HIV aren’t having a more difficult reaction to what they are experiencing. For that matter, it challenges me to consider how much of my happy-go-lucky attitude is an emotional defense, and how deeply my own wounds might go.

Will a leather sofa and a quiet space help with that?  It couldn’t hurt.