The good people at Thrive Alabama has been working their butts off for years, covering twelve counties in northern Alabama with five free clinics and vans that travel country roads you would never find on your GPS just to fetch clients for appointments and get them home again.

But don’t ever say that the hardworking folks at Thrive, based in Huntsville, don’t have a sense of humor.

Their hilarious new public service announcement is a World Wrestling-style smackdown that pits PrEP & Prevention against HIV & Stigma. This video has everything a campy southerner might imagine: smack talk, ripped sleeves, and macho posturing between the opponents. It’s as if extras from the set of Lucky Logan decided to make an HIV prevention video.

The folks who made this video have their tongues planted in their cheeks more firmly than a wad of chewing tobacco. Who the heck came up with this?

The brains behind the brawny video are Thrive staff members Mark Moore, Director of Development and Marketing, and Jay Hixon, Communications Specialist.

Even though I was born in Montgomery, Alabama, I felt sheepish about telling the team that they have just produced the first redneck PrEP video. They laughed out loud and took it as a compliment.

“We wanted to do something to stand out from the pack,” Mark Moore explained. “There have been sexy PrEP videos with hot guys in bed, which we loved, but that’s not what we could do in Huntsville, Alabama. I knew I wanted to talk about stigma. If stigma is a fight, who’s fighting it? So I talked to out communications specialist Jay Hixon about it, and he went into his office and shut the door. This is what he came up with.”

“In the south when I was growing up,” Jay Hixon adds, “it was all about Hulk Hogan and WWF wrestlers. I wanted to harken back to that. And it was just plain funny to think of it as a prime time fight.”

What is striking about the video is that there are no discernible gay men. The video, although campy around the edges, turns other gay-centric PrEP videos upside down while playing with straight stereotypes. “We have a lot of people here who are ‘men who have sex with men’ but who do not identify as gay or just don’t do labels,” Mark said.

The cast of the video includes friends and local theater actors and was produced by the local production company 4 Mile Post. Fun fact: the actor playing “HIV Prevention” was the first openly gay Navy Seal and lives outside Huntsville. Talk about heroic!

The video’s messages are a bit more conservative than other PrEP videos, urging people on PrEP to continue to use condoms to prevent other sexually transmitted infections. Which is factual, of course, and more in line with what Jay calls “southern sensibilities” than other PrEP messages geared specifically toward people who are barebacking.

There is such a sense of joy in this video, and you can tell they are having some sly fun sending up southern stereotypes. You should really check out Thrive Alabama’s Youtube channel to see more of their work.

Organizations like Thrive Alabama are doing awesome work with very limited resources in areas of the country that need it most. I love shining a light on their creativity and energy. 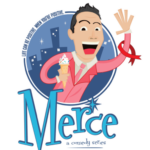 Speaking of the intersection between humor and the fight against stigma, the web series Merce is gearing up for another season! The show, which “has all the low-budget appeal of an early John Waters romp,” is about an HIV+ New Yorker and is engaged in their fund-raising campaign to make season two a reality. Why should you care? Because I’ll be making my web series debut as “Aunt Bless” in a few of the episodes. So throw down a few bucks, y’all. Aunt Bless is on the way!