My Fabulous Disease: The Top Ten Postings of Year One

Previous Next
My Fabulous Disease: The Top Ten Postings of Year One

“The suspense is terrible. I hope it will last.”
— Oscar Wilde, The Importance of Being Ernest

How was this judged, exactly? I was afraid you might ask. Not on the number of hits or any formal voting procedure. I relied purely on feedback received through the year and from posted comments, but mostly, umm, I picked my favorites. So there. 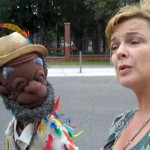 #10. The Wisdom of Youth at AIDS2010. My skills (and physical stamina) were sorely tested when TheBody.com sent me to Vienna for the 2010 International AIDS Conference. Every day was a sprint around the massive conference center in search of stories that inspired or amused me. In this episode, I was blown away by a collection of teenage (!) activists from around the globe who gave a press conference and then chatted with me (try being nineteen and an HIV advocate in Afghanistan). Then I interviewed an actual muppet with No Strings, a program that uses puppetry to communicate with African children about AIDS, transmission, and grief. Awesome. 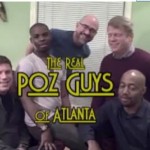 #9. The Real Poz Guys of Atlanta. Nothing has been more important to my long term sanity and well-being than the support of friends, so I decided to let you meet a few of them in this ongoing series of videos. In this, our second get together, my friends Craig, James, Antron and Eric and I (all of us are living with HIV) bake brownies — recipe included in the post! — and dish about our HIV, doctors, families and love lives. To top it off we all engage in some surprisingly moving “show ‘n tell,” by bringing things to our dinner that represent something about life with HIV. If you need to feel the love of friends right now, check this out. 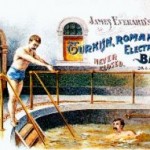 #8. Locker 32, your room is ready… to be hosed and sanitized. Okay, so here’s my bawdy comedy side, in a farewell essay to the gay baths. In my former, youthful and/or drug fueled days, I was a staple in such establishments, and the value of how one looked sauntering about in a towel was a misguided priority that, frankly, I’m still working to shake from my world view. But there’s no such depth in this funny essay, just a final look at the baths on my very last visit, or as the piece begins, “the last time I went to the baths… I stepped in poop.” Hold your nose, and enjoy! 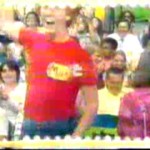 #7. The Price is Right, thirty years after coming on down. “When I was 19 years old, I vacationed to Los Angeles and won a car on The Price is Right.” So begins my book “A Place Like This,” my first-person account of my years in Hollywood in the 1980’s. I use the game show story to reflect on the young man I was and what dreams I had, while AIDS looms in the near distance ready to wreck the plans of a generation. I’ve always liked this as its own essay, though, and thought it would be fun to include the actual footage of my winning the car, so the reader can watch the little story come to life. 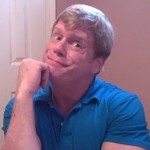 #6. My T-cells Could Use a Facelift. I’ve probably posted the heart and soul right out of this poor video, using it more than once this year, but it remains a favorite of mine because it strikes the heart of my issues as a gay man, a man with HIV, and an aging one at that. We’re the guys that can still remember being youthful but we just don’t quite hack it in the cruise clubs anymore. I know I shouldn’t miss it, and yet… The video also lets me show off my butt pads and discuss my not-so-subtle tactics to avoid growing up. Maturity is hard won in my household, my friends. 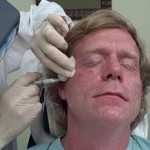 #5. A Facial Wasting Update. This is when I realized the real potential of my little digital camera: when Dr. Gerald Pierone agreed to let me film our consultation about my facial wasting (lipoatrophy), and the procedure to remedy it. This episode is actually our second video together, when I returned for a follow-up treatment — it reviews footage from the first visit but also gives a more accurate look at the treatment results. At the end of the first episode, I was so pleased with my new face that I shot my closing with such bright light I looked like I was voguing in a Madonna video. I don’t make that mistake again. 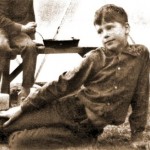 #4. I am the man my father built. Why are there passages in our life that we return to, again and again, those milestones that shape us and serve as references points our entire lives? Camping in the woods would seem an unmemorable scenario for a young gay boy like me (behold my pubescent self, right, in repose). Dad wasn’t trying to butch me up, he simply reveled in being different, like pitching a clear plastic tent when all the other fathers and sons on the campout had normal ones. But every time dad instilled in me the value of being different (“that’s the beauty of it,” was his most common exclamation), he was preparing his son for the world in a way he never imagined. A love letter to my dad, and I hope you’ll read it. 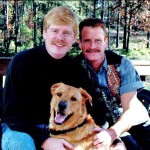 #3. Examining death, including the one I caused. To be honest, I thought I was doing my ex-partner Chris Glaser a favor by reviewing his most recent book. But that blithe arrogance evaporated when I read his elegant book about death, “The Final Deadline.” Chris devotes chapters to manners of death and their lessons for the living, and to my surprise includes one about the death of our relationship and there, suddenly and in black and white, was the wreckage of a romance, and the crushing hurt I had caused when I chose my escalating drug addiction over my partner. Reading this book would enlighten anyone, but no one more than me. Chris’ capacity for forgiveness and finding teachable moments is more beautifully rendered in his book than anything I might conjure. 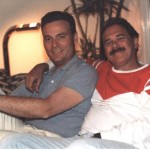 #2. Once, When We Were Heroes. Another one I’ve posted to death — the video version has been on my main page for ages — but it’s as if I’m afraid I’ll never write something quite like it again. It sprang from my observations about so many of us that lived through the horror of the 1980’s and how mundane our lives are today. So many of us were called upon to do courageous things, or withstand terrible grief, and today we’re shopping at Macy’s and planning brunch. Which is a miracle and perfectly allowed, of course. It just makes me realize that you can never know what the man on the treadmill at the gym might have once withstood, or how resilient our own spirits are, when we once thought they might never survive.

And the #1 blog posting of my first year is… 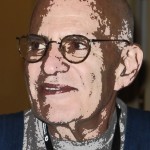 #1. The Day Larry Kramer Dissed Me. Pure whimsy, no doubt about it, and the funniest part of this fictional account of a disastrous trip to the mall with Larry Kramer was how many people didn’t know I made the damn thing up. Not until they read the footnote. Reactions were all over the place: how dare I ridicule an icon, they wanted to know. I would be dead if it were not for him, they wailed. And “this is hilarious, please do HRC next!” I have not had the honor of meeting Larry Kramer but idolize him as an activist and as a writer. And if my “six degrees of Larry Kramer” friends are telling the truth, the man himself got the joke and liked it (and even left a posted comment for all to see).

Honorable mentions: My provocative chat with activist and POZ Magazine founder Sean Strub, “Five Things About HIV They’re Not Telling You,” had prevention advocates either impressed or aghast, and that’s a good thing. My favorite little video was the Gay Pride PSA That Will Never Air, which begins with funny stories before it punches you in the gut with a message about drug addiction. And speaking of addiction, there’s a precious vision of recovery is in the simple essay “A Dance to an Atlanta Night,” in which I enjoy some simple pleasures with friends who have seen me at my worst.

I feel like I’m hitting my stride. Thanks to all of you for your words of encouragement, and I mean that. This has been an awesome adventure because of you. As always, please be well.

——————————————–
I hope you will consider “sharing” this via the buttons below with anyone who might enjoy an introduction to the blog. I love reaching new readers. Thanks.